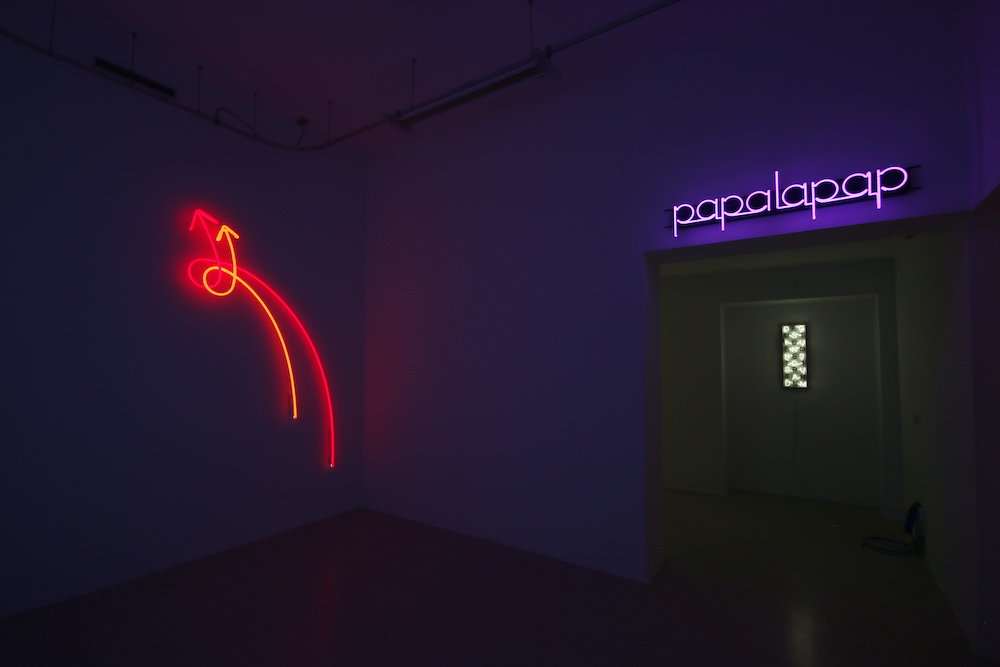 Menhir Arte Contemporanea is pleased to announce the first exhibition of the German sculptor Albert Hien in the gallery curated by Rossella Farinotti. The exhibition entitled papalapap will open to the public on November 21 and will remain visible until January 20, 2020.

The artworks on display are a collection of neon works created by the artist in dialogue with the gallery spaces where the word, in its multiple meanings, takes on the leading role. The colorful characters on the walls catch our attention turning it to the formal and aesthetic aspect of the language. The words written with neon seem to be left hanging - they stand out from the wall to the eye in an immaterial place made of lights and colors.

Albert Hien prefers the medium of neon due to its evanescent character but, as a sculptor (participating in documenta 7 and 8), the detachment of signs and letters from the surface and their recombination as a sculpture, becomes the artist's priority objective. The specific materiality and technique used to create neon systems, as well as the color effect, remain a constant in Hien's artistic experimentation from 1989 onwards.

The artworks on show in the gallery express the artist's intention to play with language, combining different idioms and commonly used words to compose them together exactly like a puzzle. Albert refers to the childish part of our memory, in which the playful component invades the rational sphere, bringing our attention back to listening to primordial emotions. During the developmental age the game carries out various motor, intellectual, social, emotional and affective functions. In particular, the game allows the child to train the mind and the body, develop the imagination, control the emotions. Hien, sometimes depriving the language of meaning by breaking down and reassembling our communication codes, reflects on the image and on the sensations that derive from them.

Papalapap, the title of an exhibited work that gives its name to the show in the gallery, becomes the manifesto of a new language, an end in itself, colorful and curious. The performative transformation of the individual elements that form a sentence or word is perhaps the main aspect of the character of the exhibition. The result of Albert Hien's research into the enigmatic link between content and form thus translates into luminous installations that are sometimes ironic, sometimes with a pure aesthetic impact. The letters become vehicles of sensations that gradually from the bright colors of some sculptures become monochrome, to the essentiality of white and black.

The exhibition will be accompanied by a critical contribution by Rossella Farinotti.


Albert Hien was born in Munich in 1956 - he lives and works between Munich and Hochstätt in Germany.
In 1982 – as a student – Hien was invited to his first documenta participation in Kassel. What followed was a rapid career with numerous exhibitions and large-scale installations: at the new Hans-Hollein-building of the Museum Abteiberg Mönchengladbach under the aegis of legendary Johannes Cladders in 1984, at the Folkwang Museum Essen also in 1984, at the National Gallery Berlin in 1985, “Transatlantik” at the Kunsthalle Köln in 1986 and at the Städtische Galerie im Lenbachhaus in 1991. As curator of the German Biennale-contribution, Armin Zweite invited Albert Hien to Sao Paulo in 1985. Hien also participated in the documenta 8 in 1987. He exhibited in numerous museums and foundations and since 2001 he holds the professorship at the Academy of Fine Arts in Munich, Germany.