Winfred Gaul was born in 1928 in Düsseldorf. After graduating at the Cologne University, in 1950 he attended the Academy of Fine Arts in Stoccarda, focusing on painting. He made his first appearance with informal paintings shown in his first individual exhibition in Baviera in 1956. After a period spent in Rome, in 1961, Gaul abandoned the informal art and turn to his “Signals period”: acrylics on shaped forms, with clear profiles and contrasts and full colors. Returning to Europe, after a period in the USA, the artist devoted himself to teaching. In 1968, Gaul met Gianfranco Zappettini. Expert of Italian Abstraction, along with Zappettini and the german art critic Klaus Honnef, is the founder of Analytic Painting. His works from the last two decades is set on cursive compositions balanced on color contrasts. Among the group exhibitions dedicated to international abstraction, he participated in “Tempi di percezione”, Livorno, 1973; “Un future possible. Nuova pittura”, Ferrara, 1973; “Geplante Malerei”, Münster, 1974 and “Analytische Malerei” (Düsseldorf, 1975). He died in Düsseldorf in 2003. 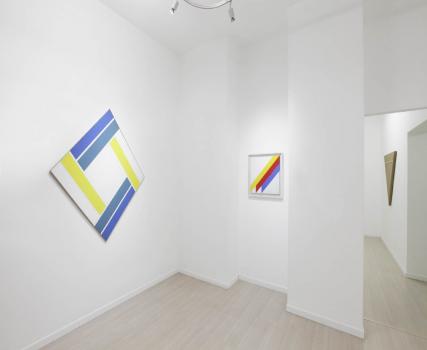