Giovanni Campus was born in Olbia in 1929, he attended classical studies in Genoa and then studied art at l’Accademia di Belle Arti in Livorno. Between the final years of the 1960s and the first half of the 1970s, he participated in avant-garde exhibitions such as “Numero” and “Technè” in Florence and “Sincron” in Brescia.

In this period, he moved in artistic circles which included important and influential curators and art critics such as G. Appella, GC. Argan, U. Apollonio, G. Beringheli, L. Inga Pin, LV. Masini and A. Passoni. He spent artistic sojourns and long work periods in Paris in the 1960s/1970s and then shifted focus to New York in the 1980s/1990s.

He participated in numerous projects and installations in urban itineraries and in nature: from the Piazzetta in Milan’s Palazzo Reale in 1977, to the Galleria Comunale of Bologna in 1978; from the Gallura coast of northern Sardinia in 1983 to the Parco Geominerario of Carbonia in 2014.

One remembers the personal exhibitions which also possessed significant anthological indications such as those at Livorno’s Museo Civico in Progress in 1979, at Ferrara’s Palazzo dei Diamanti in 1987, the presentation of Giorgio Cortenova and the monographic volume “Disegno Ricognizione Intervento” at Verona’s Palazzo Forti in 2006 and the exhibition at Livorno’s Museo G. Fattori in 2015.

Among the memorable expositions, one marks the 1970, “1→∞- New Multiple Art”, the traveling exhibition of the Whitechapel Art Gallery in London, the participation in the "II Triennale India" for the Padiglione Italia in 1971 in New Delhi, while in 1979 Campus took part in the “Six British International Print Biennale", at the Sezione Italia, in Bradford. In 1986, Campus exhibited in Japan for the "Experimenthal Art, 6th International exhibition” at the Yamanashi Museum in Kofu; in 2008 he participated in the "Viaggio in Italia” exhibition at the Neue Galerie Am Landesmuseum in Graz. More recently, in 2011, Campus was present in the "Percorsi dell'Arte Italiana" exhibition at the VAF-Stiftung MART in Rovereto. 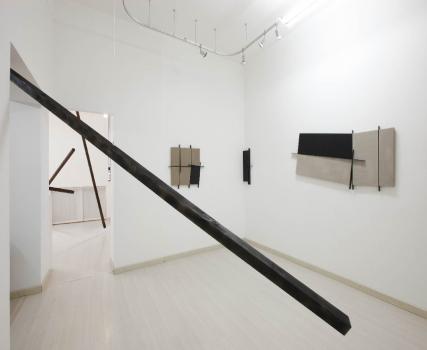