Carlo Battaglia was born in 1933 on the island of La Maddalena. He spent his childhood in Genoa and then he moved to Rome. He studied scenography at the Academy of Fine Arts, where he developed a passion for painting. He travelled around the world to discover international contemporary art and, in 1962, he spent six months in Paris. He presented his works for the first time in La Salita Gallery in Rome, in 1964, but he was consecrated as an artist with an exhibition at Salone Annunciata in Milan in 1966. In 1967, Battaglia spent six months working in a studio in Canal Street in NY, where he met Reinhardt, Motherwell and Rothko.
There, he discovered his real concerns in art: vagueness and illusion. He created “Misterioso”, “Vertiginoso” and “Visionario”, artworks which analyze the relationship between solids and voids in the city. In 1970 he presented for the first time “Maree” in an individual room at the Venice Biennale. Battaglia took the distance from the theories of European Analitic Painting, enough to completely isolate himself in 1980. He permanently moved to La Maddalena, where he died in 2005. In 2008 Battaglia’s wife, Carla Panicali, famous art collector and gallerist, decided to catalogue all his works. 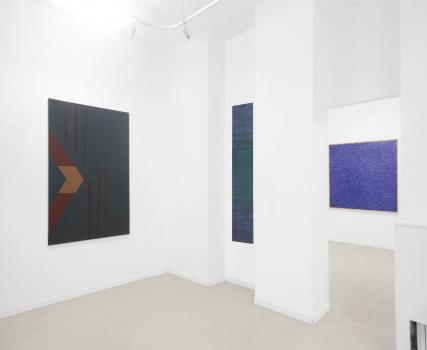